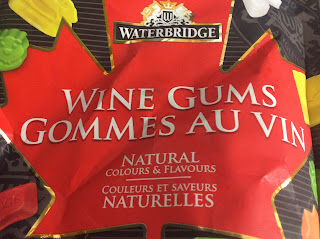 During the Christmas season the local Red Apple Department store starts getting lots of wine gums in stock. And I stock up on these all natural British Wine Gums when they arrive!

Boxing Day 2019 is  when I began this post. One year later the world is a much different place with the Covid pandemic but quality food is as important as ever. Maybe more so!

I can tell you I still have a tea spoon of berry powder (at least a teaspoon) and some of the green power blend too. Once you get in the groove it's an automatic part of the day.

One thing about this pandemic is that there is extra time to follow these daily doses of superfoods. During a lockdown I found time  to do things like artwork, making a 1980s themed room complete with VCR and Atari 2600, and yes, work on this blog.

But  now it's Christmas season in 2020. When you buy candies as Christmas gifts, don't you feel better when you know they are free of anything unhealthy?

This is   a time where many of us are eating the chocolates and other goodies we received. For me,  living in North America, there are TOO many  artificial ingredients in our foods. Europe by comparison usually has all natural ingredients and even non GMO areas. 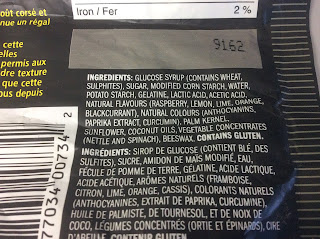 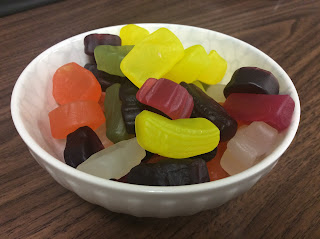 The wine gums that Maynard's  makes in Canada are tasty, but some of the ingredients are really bad and discourage me from buying them more often. When you bite into a Waterbridge Wine gums you can TELL right away that it's real fruit flavouring.

And even though I'll be right up front that the flavouring from these ingredients probably isn't  in large enough quantities to affect health, these are some of the healthiest superfoods you could  possibly include in your diet.

So what are they?Extracts from berries, fruits, and veggies.

No harm in me highlighting the berries anytime they show up!

And later on we'll look at  what's in those other made in North America Wine gums. Wine gums are found more in commonwealth countries than America though. Oftentimes Americans have never heard of Wine Gums.

So while the colours and flavours in British Wine gums are natural, there is still  syrup and other things  there so remember to brush your teeth. This particular pack did contain gelatine which is not suitable for vegetarians as it is an animal product but the good news is that Waterbridge does make Canada themed vegan wine gums that have the same flavourings as the others!

My favourite fruit is raspberries so lets start with them.  First on the list and my favourite fruit. You know it if you have read my other posts about raspberries. I personally eat some freeze dried raspberry powder every day. It's tangy but doesn't contain a lot of sugar, has more antioxidants than most other fruits, and contains a good mixture of vitamins, minerals and fibre. The most amazing thing though is it's cancer fighting properties. In lab studies rats fed a diet of 10% freeze dried raspberries saw their tumors decrease in size by up to 70%!

This article details some of the protective qualities of berries in your diet. Nih is a very reputable source for scientific information.

Besides the berries you also have delicious flavour from lemon, lime, orange, and blackcurrents. All of these are great sources of vitamin C, a powerful antioxidant. British Sailors in the 19th century knew that citrus was a source of this essential vitamin and took fruits like these on their  ships to ward off deficiency known as Scurvy. That's why they had the nickname Limeys!

These fruits are also great sources of fibre which is thought to help weight loss by making you feel fuller.

So those are  the natural flavours but what about the colours? They are also all natural and interesting too. We have anthocyanin which are the antioxidants that give fruits their attractive and vibrant colours, and other things too like Paprika and curcumin.

Antioxidants are thought to improve general health and may even slow down age related diseases. The more colourful the vegetable is when you're out shopping at the supermarket the better. As a general rule of course! So pick red onions over white ones, and red potatoes over the regular white ones.

Paprika  is a spice that's loaded with beneficial antioxidants and has some that help the eyes in particular. Those are things like beta carotene and lutein. These antioxidants clean up free radical debris that can cloud vision. Blueberries are also great for vision by the way. I use Paprika in my cooking often. My favourite is in a simple yogurt drip with paprika, garlic, salt, something green like parsley or chives, and a little lemon juice. One of my go to movie watching snacks for sure. Thanks Chris for introducing that to me!  In the colouring we also have curcumin which is found in the famous curry spice Turmeric. It's thought to be effective at reducing joint pain especially when consumed with black pepper.

And you know what? Even if it wasn't, the human mind is such a powerful that you just have to THINK that you are doing something positive and you will feel some benefits! 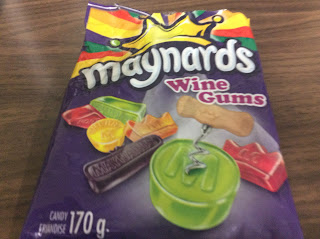 Now that we've seen Waterbridge's well thought out ingredients lets look at the Maynard's wine gums. Only quickly because it won't take long to show you what the difference is. 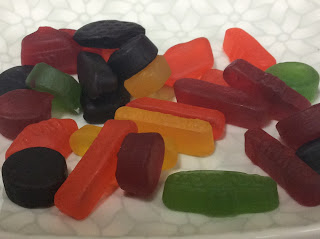 I'll be right up front. The Maynards Wine Gums are delicious and addictive. I used to gobble down free ones that were given to me. But all the same the ingredients just aren't as natural as the British wine gums.

Considering the John Maynard started making wine gums in 1909 they should have figured out how to make them the best by now. But sadly when large companies are allowed to cut corners and use less expensive artificial ingredients they sometimes will. Some bean counter will get a promotion that way as my old employer Bob would explain in his own words.

Here are the ingredients in Maynard's wine gums sold in Canada 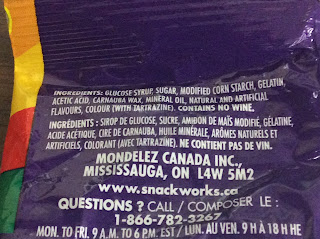 In Britain Maynards wine gums contain beneficial natural ingredients like the ones I mentioned earlier. But when you look at the ones sold in Canada it's a little bit of a different story. There are artificial flavours that may include chemicals, and artifical colours too.

As you can see Tartrazine is specifically mentioned in that department and is probably legally required to be identified there.

Tartrazine is mentioned in the ingredient list for Canadian Maynards Wine gums for a reason. It's thought to cause health issues like hyperactivity in children and possibly some other conditions like allergies and asthma.  I avoid all foods with tartrazine if I can. Even Kraft Dinner has taken it out of it's Mac and Cheese now. It's what gave it that bright  yellow colour! But Kraft has found alternative natural colourings that give it that same distinctive colour now. I avoid the bright yellow cheeses in grocery stores for the same reason, and you can find these artificial colours in drinks too if you look. Here is a study that hints at the link between Tartrazine and child hyperactivity.

It's alarming also that Tartrazine could cause liver damage. That alone should be enough to deter consumers from buying ANY products that contain it. Here is a study that provides evidence of this.

I know for a fact that British wine gums are available in Canadian stores, including stores like Bulk Barn, Red Apple and Shoppers Drug Mart.

So at the end of the day the Maynard's Wine Gums are tasty, but could easily be made better with the elimination of artificial colouring like Tartrazine. It's just a matter of consumers saying no to artificial ingredients.  Given the choice I think the English Wine Gums are healthier for this simple reason.

The Waterbridge Wine Gums were equally tasty but my all time Wine Gum favourites were the ones sold in the Marks and Spencer shop in Bayshore mall in the 80s. One more reason to add to the list of reasons to time travel back to 1985....

Note : The information contained in this blog is not medical advice. It is composed of personal opinion and is intended to encourage the reader to read more about the subject so they can draw their own opinions. Consult a medical professional with questions about diet.

Posted by Tariq Hossenbux at 20:14 No comments: